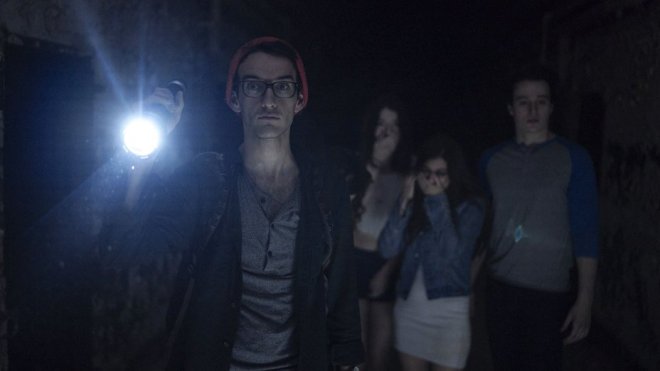 We’ve all been there: the party’s becoming a partay, the drinks are going down and hormones are getting high when all of a sudden, someone suggests you go and explore the neighbourhood’s abandoned and reportedly haunted prison. Classic night round mine, that.

The unfortunate thing is, whereas we only ever got as far as Threshers, the characters of Against the Night get into allsorts of bother involving axes, gas masks and crystal meth. Under the pretence of filming the footage for a ghost story TV show, the audience follow the meat, sorry, the teens via night-vision camcorders which are effectively juxtaposed with expositional camera shots.

This visual approach keeps the film feeling fresh, although it also adds to the general confusion, especially as these pesky college kids all look the same these days. The cast gel together well as a believable bunch of friends but boy, oh boy, are they annoying! It’s a shame that Frank Whaley (Pulp Fiction, Swimming with Sharks) is used so sparingly too, but his role does add a good helping of Hollywood heft to the proceedings.

Any claims that a film location is like a character is a toe-curling cliche, but the prison used in Against the Night is any location scout’s dream/nightmare. Filmed largely on location at Holmesburg Prison, Pennsylvania (most notably used in the fantastic Fallen (1998)), the prison itself seems labyrinthine in structure and is used to both claustrophobic and disorienting effect. 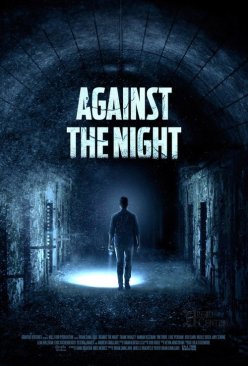 Director Brian Cavallaro employs some neat tricks too. The draining of the battery level on the camcorder display is a beautiful tension-building technique and the film is as self-aware as Scream in places. Getting the kids to give up their phones for authenticity was a neat way to manage modernity whilst their reservations about “spreading out” show that maybe the kids are alright after all.

The film straddles sub-genres from found footage to slasher to sci-fi and back again, which whilst ambitious in its aims, is as disorienting as the prison. Against the Night keeps you guessing until the final frame but unfortunately, it’s a frustrating journey up until that point. Having said that, there’s certainly no shortage of scares, shocks and surprises along the way.

Against the Night will be available on iTunes, Fandango Now, Vudu, Amazon, Google Plus, Xbox, iN Demand and additional digital platforms on March 27 2018.