Before someone nukes this site from orbit, let’s celebrate the release of Alien: Covenant and the 38th birthday of everyone’s favourite Xenomorph.

Let’s get the obvious one out of the way first. Sure, it looks dated and has been parodied to death, but the Hitchcockian gall of killing off the most renowned actor in a moment of calm is still a shock to the system. The effects of this scene would have repercussions throughout the series and although often imitated, was never bettered. This was the world’s, as well as rumour has it, the cast’s introduction to the Chestburster. That look of shock on Veronica Cartwright’s face as she’s splattered with blood? Not acting.

Charged with the unenviable task of reigniting the fear factor in the franchise, Prometheus’ cesarean section scene survives as one of the most memorable. Carrying all the connotations of violation and impregnation that captivated audiences 38 years previously, Elizabeth Shaw (Noomi Rapace)’s self-surgery is terrifyingly tense and wince-inducing, even for the male audience. After the alien is mechanically forcepped from her, Shaw tears the umbilical cord and squeezes underneath the suspended Xenomorph before escaping.  Comments of “I couldn’t drive for months after my C-Section” failed to kill the mortifying moment.

What seemed to be the final nail in the coffin of the “Quadrilogy”, Alien Resurrection actually has some fine moments. The stunning underwater alien escape overflows with originality in a franchise that was fast running out of ideas, whilst the seven Ripley clones are equal parts horrific and heartbreaking. In another original, fan-boy moment, the fit-to-burst alien-gestating Purvis (Leland Orser) positions Dr Wren (J.E. Freeman) exactly where he wants him and in a conveniently well-timed instance, the chestburster becomes a headburster. Game Over, man! 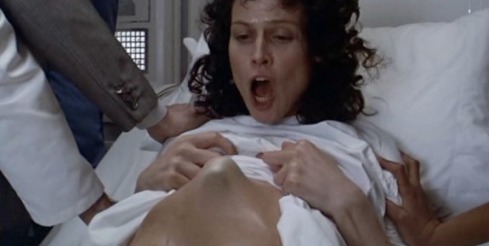 In a film which is infested with aliens, there’s very little chestbursting to be had in Cameron’s gung-ho sequel. The planet of LV-426 has long-since been colonised by the alien formerly known as Star Beast and it’s these thoughts that destroy Ellen Ripley’s days and haunt her nights. After Ripley (Sigourney Weaver) is rescued following her alien encounter, her bedside return to work interview with a caring Weyland-Yutani company rep is interrupted by an old friend who is bursting to get out until….Phew! It was all a dream. Thank goodness that’s all over. No, wait…

The climactic moment’s of Fincher/Fox’s Alien 3 is a masterstroke of bravery or stupidity, depending on who you speak to. Having been impregnated with an alien queen, Ripley is confronted by representatives from that pesky company again, this time, offering to help rather than weaponize her expected offspring. Backed into a corner, Ripley in a messianic moment, takes a swan dive into the furnace, killing the beast and nearly the entire franchise in the process. This of course, is not before her newborn bursts forth as they share a maternal moment that makes you go all gooey inside.

On that note, Happy Alien Day everybody.

Has your favourite been missed out? Let me know in the comments below.

2 thoughts on “Alien: The Best Births ”